Literally translated it means “it is not taboo to go back and fetch what you forgot”.

Sankofa, the Adinkra symbol of the Akan people, from what is known today as Ghana, “teaches us that we must go back to our roots in order to move forward. That is, we should reach back and gather the best of what our past has to teach us, so that we can achieve our full potential as we move forward. Whatever we have lost, forgotten, forgone or been stripped of, can be reclaimed, revived, preserved and perpetuated”.*

Today’s post is dedicated to the Sankofa spirit of Carnival. And to “open the way” to any good African ceremony, one must give a blessing, a libation. So I ask the Creator Spirit, the Creative Spirit, the Eternal Source, to open the way for this series I give thanks to my ancestors and elders especially the unknown ones who carried the essence of things important in their souls across oceans, across violence and despair, transformed it into resistance, rebellion and celebration. I give thanks for the Mas Men/Mas Women past and present (especially EGR, DAR, ZBG), the griots (specifically CYR), the musicians (RR), and the care givers (especially JPF) without whom we could not have what exists today. I give thanks for the crazy, dedicated, passionate pilgrims who toil for months making costumes, arranging music, practicing, organizing, feting, dancing, singing and preparing for another carnaval.

In many interpretations dis is WE carnival, return and get it! 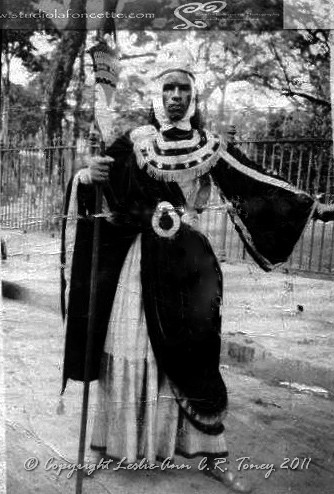 To “play mas” is the term used by Trinbagonians to refer to what we do. Not not march, not parade, not masquerade. According to Hollis “Chalkdust” Liverpool, for Africans mask and masking are “interlocking aspects of most African celebrations.” A masquerader becomes that which he or she inhabits. It’s not a man playing a dragon, or a woman playing a jamette, it is The Dragon, or the Jamette, The Midnight Robber or the King. My grandfather would say that long ago, people went to pick up their costume with a hired car, and today, they go with an envelope. Here he is, EGR as King Ahab on Carnival Tuesday, circa 1948. My grandmother tells stories of taking the children to the Savannah to see mas, waiting excitedly for “Daddy” to pass, and they would shriek in delight the moment he crossed the stage. He was a worldly royal figure in his robes, unconcerned with anything and anybody but dancing de mas. 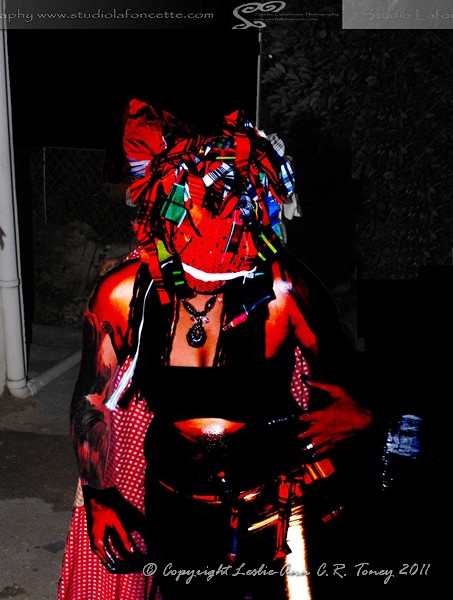