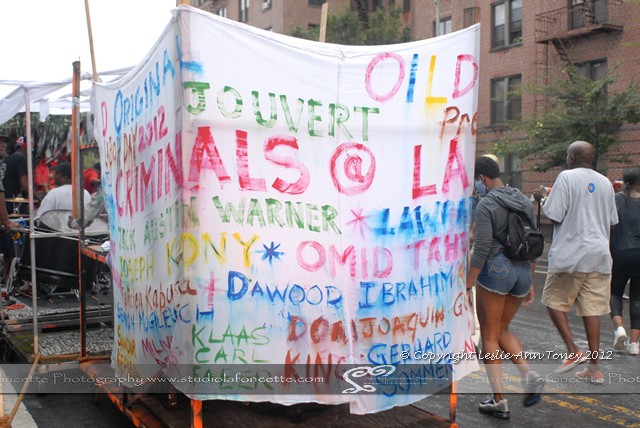 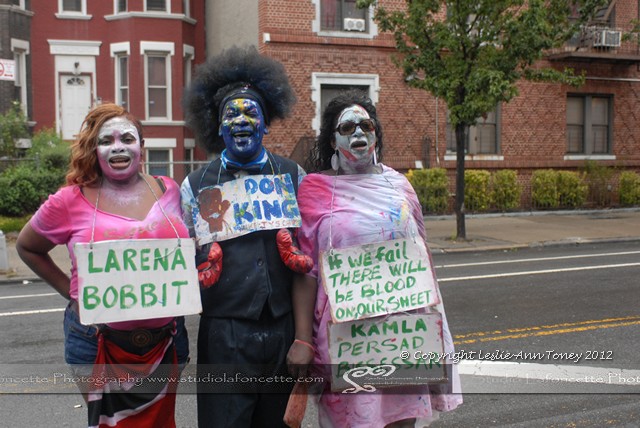 Oil Downers, a band from Brooklyn New York played Criminals at Large this year. It was pretty much their same them from the past two years displayed creatively. In 2010 when I first saw them they played White Devils. Last year for Brooklyn Jouvert 2011 they played Gangsters. I really like the paint work on their faces. Several notable criminals (this is the band’s perspective eh folks) are on display. You can see more by clicking here.

This week I’m trying to do a close-up of sorts on elements of Brooklyn Jouvert. I’m a bit sad to say this, but I find it to be better than Jouvert in Trinidad now. Now, before any of you go eating off my head let me say this: Trinidad is Trinidad, home will always be home. And there is no communal understanding of the satire and the significance of Jouvert that surpasses what one can find in those who still understand it in Trinidad. However, those few are in a fierce competition, whether they know it or not, with the forces that lead people to join bands of revelers in maxi-taxi caravans to “exclusive” hideaways on the northwest coast to jump and spray each other with paint. Jouvert get too dangerous in town they say. First they raided St. Clair but the residents of the posh neighborhoods have the clout to dampen that occupying threat. They moved around Woodbrook and even edging on Maraval but steering clear of painting the old town red with disorder. Meanwhile social protest in the form of costumes, satire, well thought out mockery of the status quo parades in near silence on South Quay.

There is a reason for the refrain, “J’ouvert baway-o, pa metay la main asou yo”*

*Jouvert, stop them but don’t touch them.”